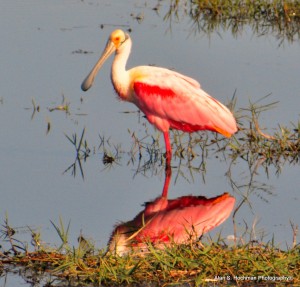 The Roseate Spoonbill (Platalea ajaja, sometimes separated in the monotypic genus Ajaia) is a gregarious wading bird of the ibis and spoonbill family, Threskiornithidae. It is a resident breeder in South America mostly east of the Andes, and in coastal regions of the Caribbean, Central America, Mexico, and the Gulf Coast of the United States.

The Roseate Spoonbill is 80 cm (31 in) tall, with a 120–130 cm (47–51 in) wingspan. It has long legs, a long neck, and a long, spatulate bill. Adults have a bare greenish head (“golden buff” when breeding) and a white neck, back, and breast (with a tuft of pink feathers in the center when breeding), and are otherwise a deep pink. The bill is grey. Sexes are similar.

Unlike herons, spoonbills fly with their necks outstretched. They alternate groups of stiff, shallow wingbeats with glides